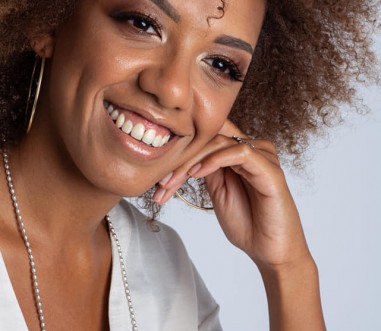 European Classical High School Graduated
Isabella Iè, born in Arzignano (VI), class of 1987, grew up in the Vicenza area and then moved for study to Verona, the city where she has since remained.
A graduate of Liceo Classico Europeo at Educandato Statale agli Angeli, she has been involved in study and experiential research in the field of Personal Growth and Emotional Intelligence since 2012.

She studied Gospel Singing at the San Lorenzo Music Institute in Lonigo (VI) and over the years has specialized in music therapy.

Where does the Atelier Cresco idea come from and why?

Here is part of the interview written from Isabella:

My exact name is Isabella N'djemè and I am Italian African.
I was born and raised in Italy but my origins are multicultural.
The family on my mother's side is originally from Treviso , my grandparents Giovanni and Annamaria were two professors, my grandfather then decided to devote himself to an entrepreneurial career by investing in the tanning industry and that is why the whole family moved to the Vicenza area.
My father's family is from Bissau, Guinea. My grandmother, Bade'ncilo Co was a white shaman , my grandfather Quirminqezt Ca , was the village chief of their tribe.

Both my parents were born in the 1960s, my mom experienced the Italy of those years,went to the best schools and became a teacher herself.
My father for the first 15 years of his life lived in the Black Forest, then as the city grew my grandfather made him study in a Salesian center, he distinguished himself with excellent results and won a scholarship that allowed him to come to italy to complete his studies as a technical expert.
It was during these years that my parents met, married and had three daughters, of whom I am the first.
Growing up in such a family was extraordinary, but not easy.
Every action and word needed to be pondered, processed and then spoken, so as not to run the risk of creating misunderstandings, and this led me to develop a natural talent for listening , observing and gleaning the emotions behind my every gesture.
Today scholars would call this subject Emotional Intelligence, I call it empathy .
.
I economically and as a possibility have never lacked anything, but inside me there have been an 'explosion of events.
I often felt that I was not enough, I felt out of the chorus on many occasions, as if I came from a different world and without the courage to show myself to the world or my parents.
There was one person, however, who wanted to get to know me, listen to me and then simply live and for my first 24 years of life supported me and above all believed in me, and in doing so brought out the best in me, making the best version of myself flourish.
My grandfather did it with me, I want to do it with young people.
Hence Atelier was born.
Translated with www.DeepL.com/Translator (free version)
To Top ↑